A True Historicall discourse of Muley Hamets rising to the three Kingdomes of Moruecos, Fes and Sus. The dis-union of the three Kingdomes by civill warre, kindled amongst his three ambitious Sonnes, Muley Sheck, Muley Boferes and Muley Sidan. The Religion and Policie of the More, or Barbarian. The adventures of Sir Anthony Sherley, and divers other English Gentlemen, in those Countries. With other Novelties.

This copy of an extremely rare book about the history of Morocco, published in 1609 and "Printed by Thomas Purfoot for Clement Knight, and are to be sold at his shop in Paules Churchyard, at the Signe of the Holie Lambe", once was in the collection of several important collectors and is named "the Beckford copy" after the most important collector who owned it once.

After Beckford had to downsize his collection in 1822, despite his enormous wealth he spent more money than he could afford, it came in the possesion of the first Duke of Sussex, a son of King George III and another great bibliophile. When after his death a part of his library, consisting of only his bibles and bible manuscripts, was auctioned in 1844 by Messrs. Evans at no. 93, Pall Mall, London, it took 4 weeks from July 1st up till July 27th to complete the sale.

Then we loose track, till in 1974 it shows up in Bulletin no. 27 of the antiquarian bookseller Francis Edwards. From there it apparently moves to the USA where it later is acquired by a couple of other important collectors: Dr. & Mrs. H.R. Knohl who put it on the shelves in their house; the Fox Pointe Manor at Anaheim Hills.

In the second decade of the 21st century they decide to sell a part of their vast and important library and sales are conducted respectively by Sotheby's New York in October 2016, Skinner Auctions, Boston in July 2018 and Forum Auctions, London in July 2019.

On the front pastedown the larger armorial bookplate of the Duke of Sussex (There is also a smaller one. Please look for the details at http://www.manuscripts.org.uk/provenance/collectors/Sussex/Sussex.htm#sdfootnote10sym), consisting of his coat of arms, flanked by lion and unicorn supporters, surrounded by the Garter ribbon and collar, St George below, surmounted by a ducal coronet, his crest, and with his motto "si . deus / pro . nobis . quis . contra / nos" (If God is for us, who is against us?), resting on a pediment, below which in tiny lettering is the printer's mark "Perkins and Heath – Patent Hardened Steel Plate".

On the flyleaf there is the bookplate of Fox Pointe Collection - Library of Dr. & Mrs. H.R. Knohl.

On the preliminary blank someone, in a 19th century hand, has attributed authorship to Captain Robert Coverte, while it usually is attributed to Robert Cottington (R.L. Playfair and R. Brown: A bibliography of Morocco. John Murray, 1892) or Robert Chambers ( E. Denison Ross: Sir Anthony Sherley and his Persian adventure. George Routledge and Sons, 1933), whereas Cottington might be a nom de plume. Possibly this has been taken from the library catalogue of the 19th century collector Henry H. Gibbs who also possessed a copy and notes: Probably by Ro[bert] Co[verte].

An attractive copy of an extremely rare and important book with great provenance. 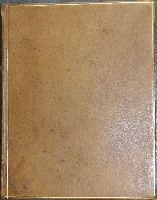 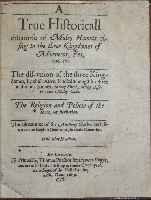