Persia Revisited 1895: With Remarks on H.I.M. Mozuffer ed-Din Shah and the Present Situation in Persia.


First edition, 8vo, ix, list of illustrations, 208 pp, 4, 32 (publishers ads). Original dark green decorated cloth. Fresh, bright gilt on cover and spine. Corners and head and tail of spine a bit bumped, some minor rubbing to backboard and a split of the cloth between spine and backboard over a length of 3 cm with a width of 1.5 mm, starting about 1 cm from the top (see picture no. 3).

General Sir Thomas Edward Gordon (1832–1914) was a British intelligence officer. He entered the army when he was seventeen and campaigned on the British/Indian northwest frontier, was second in command of the mission to Chinese Turkestan and fought in the Second Afghan War. He became Oriental and Military Secretary at the British Legation in Tehran in 1889 and later military attaché‚. He retired from active duty in 1893 but continued until shortly before his death in 1914 to be involved in Persian affairs as one of the directors of the Imperial Bank of Persia.

The naval historian Alfred T. Mahan is usually given credit for having introduced the term “Middle East” in an article in 1902. The fact, however, is that Gordon had already used this term in 1900 in his article "The Problem of the Middle East", where he had analysed problems involving the defense of India in connection with Persia and Afghanistan. 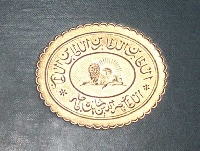