Our journey to Sinai

After the discovery of an early and important palimpsest*, containing a Syriac text of the four gospels, in Saint Catharine's Monastery by Mrs. Lewis and Mrs. Gibson, Mr. Bensly visited the same convent in the company of his wife and a few others, amongst which Ms. Lewis & Gibson. After their return to England this book was written by Mrs. Bensly.

Original blue cloth with gilt still bright both on spine and boards. Some light wear to the corners and the head of the spine as well as some very minor rubbing to the boards. Small bookseller's ticket of Goulden & Curry, Royal Library, Tunbridge Wells at the lower inner corner of the front pastedown. Interior very clean, illustrated with 14 b/w photographs about Egypt and the Sinai desert, some of which are full page with a blank reverse side, while others are in the text.

* Palimpsest: A manuscript on parchment or papyrus, which has been eraded respectively washed and which has been reused, usually containing a part of the New Testament. The later (newer) text often, but not always, is of less interest to us.

F.C. Burkitt, Evangelion da-Mepharreshe: the Curetonian version of the four Gospels, with the readings of the Sinai palimpsest and the early Syriac patristic evidence edited, collected and arranged (with literal translations of text and variants), 2 vol. University Press: Cambridge, 1904. xix + 556; vii + 322pp.

A.S. Lewis, The Old Syriac Gospels or Evangelion Da‑Mepharreshê; being the text of the Sinai or Syro-Antiochene Palimpsest, including the latest Additions and Emendations, with the Variants of the Curetonian Text, Corroborations from many other MSS., and a list of Quotations from Ancient Authors. London 1910; Williams & Norgate, lxxviii + v + 334pp. 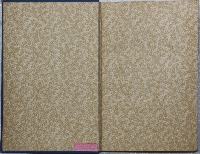