Monumental astronomic work with two large folding lunar maps (sizes 37 x 44 cm & 37 x 37 cm). These maps of the moon by Francisco Grimaldi are of great scientific and historical importance since they are the basis of the lunar nomenclature still used today and showed for the first time the effects of lunar librations. These maps were reprinted in Riccioli's "Astronomiae Reformatae", a supplementary volume to this "Almagestum Novum" which was published in 1665 by the same printing house.

Work illustrated with over 645 woodcuts and diagrams, numerous astronomic charts, nice woodcut initials, headpieces and tailpieces. Beautiful allegorical frontispieces by Francesco Curti (1603-70) depicting Riccioli´s version of Tycho Brahe's system weighing more heavily than its Copernican rival.
The words coming from Argus mouth: “ Videbo caelos tuos, opera digitor tuor” meaning “I will see Your heavens, the works of Your fingers”, while the woman at the right (Lady Astronomia ?) speaks the words from Psalm 104, verse 5: “He set the Earth on its foundations; it can never be moved.”
Title pages with large armorial vignettes of cardinal Grimaldi and of Honoratio II, Prince of Monaco. (Riccioli dedicated this work to both).

About the frontispiece (source: Osservatorio Astronomico di Bologna):
"Although she presents some of Urania's typical attributes (the starred gown, the belt with the constellations, the armillary sphere) the young woman appearing in the frontispiece is not the Muse of astronomy.

The author himself, in the dedicatory epistle, explains the complex allegory of the astronomical knowledge of his times: on the left stands Argus, his body covered with one hundred eyes, holding a telescope in order to observe the sky. The ocular of the instrument is placed over Argus' knee, where an eye opens, to mean that the scientist should always kneel down in the presence of God and keep a reverent attitude. The woman on the right is Astraea, mythological deity also known as Dike, goddess of Justice, whose name will be given to the celestial Venus. She holds a balance and weighs two cosmological systems, the Copernican one and the system by Riccioli himself. The latter is epitomized by the putti overlooking the engraving, those in the top left corner holding Venus, Mars and Mercury with the Sun (since they are considered its satellites); those in the top right corner hold Jupiter, Saturn and the Moon, that rotate around the Earth together with the Sun. On the ground Ptolemy holds his system and the coat of arms of the Grimaldi family, to which the work is dedicated".

Riccioli was born at Ferrara 17 April, 1598 and died at Bologna 25 June, 1671. He entered the Society of Jesus 6 Oct., 1614. After teaching philosophy and theology for a number of years, chiefly at Parma and Bologna, he devoted himself, at the request of his superiors, entirely to the study of astronomy, which at that time, owing to the discoveries of Kepler and the new theories of Copernicus, was a subject of much discussion. Realizing the many defects of the traditional astronomy inherited from the ancients, he conceived the bold idea of undertaking a reconstruction of the science with a view to bringing it into harmony with contemporary progress. This led to this work, considered by many the most important literary work of the Jesuits during the seventeenth century. The author in common with many scholars of the time, notably in Italy, rejected the Copernican theory, and in this work, admittedly of great erudition, gives an elaborate refutation in justification of the Roman Decrees of 1616 and 1633. He praises, however, the genius of Copernicus and readily admits the value of his system as a simple hypothesis. His sincerity in this connection has been called into question by some, e.g. Wolf, but a study of the work shows beyond doubt that he wrote from conviction and with the desire of making known the truth. Riccioli's project also included a comparison of the unit of length of various nations and a more exact determination of the dimensions of the earth. His topographical measurements occupied him at intervals between 1644 and 1656, but defects of method have rendered his results of but little value. His most important contribution to astronomy was perhaps his detailed telescopic study of the moon, made in collaboration with P. Grimaldi. The latter's excellent lunar map, engraved by Domenico Fontana, is inserted in this book and much of the nomenclature of lunar features still in use today is due to him and Grimaldi. He as well was the first astronomer to conclude that there is no water on the moon, as described in this book. He also observed Saturn, and was the first to note that Mizar was a double star. He also made observations on Saturn's rings, though it was reserved for Huyghens to determine the true ring-structure. He was an ardent defender of the new Gregorian calendar. Though of delicate health, Riccioli was an indefatigable worker and, in spite of his opposition to the Copernican theory, rendered valuable services to astronomy and also to geography and chronology. His other impotant works are: "Geographiæ et hydrographiæ reformatæ libri XII" (Bologna, 1661); "Astronomiæ reformatæ" (2 vols., Bologna, 1665); "Chronologia reformata" (1669); "Tabula latitudinum et longitudinum" (Vienna, 1689). 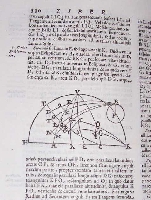 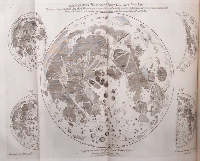 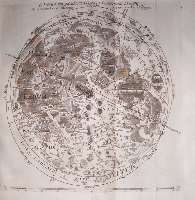 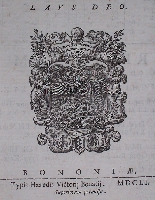