Mauritius; or The Isle of France: being an account of the island, its history, geography, products and inhabitants.

Original blue cloth with black border and gilt decorated spine; royal blue endpapers. An account of the Colony and Island of Mauritius, which has in part been compiled from old and voluminous works, such as Baron Grant's account, Montgomery Martin's and other valuable and authentic sources, the remainder being the result of observations made by the author when military chaplain in 1854. The illustrations are partly selected from a portfolio of sketches made at the same time. Overall in very good condition with little wear to head and tail of spine and lightly bumped corners, top edges darkened, gilt a little rubbed on a small part of the lower spine, covers a bit soiled, very light wear to extremities, “SCPK.62.2” written in top margin of frontis, small note on ffep (Tousaint D561 [= bibliographical note]), but overall very clean inside.

Mauritius is situated in the Indian Ocean, East of Madagascar. It was discovered in 1505 by the Portuguese explorer Pedro Mascarenhas, who did not claim the island on behalf of the Portuguese throne. Almost a century later, in 1598, it was claimed by Jacob van Neck on behalf of the Republic of the United Netherlands. He named it Mauritius in honor of prince Maurits, stadtholder of Holland. Nothing changed until it was occupied by the VOC (Dutch East-India Company) in 1638 and the still important sugar-culture was implemented. When the VOC lost its interest, in 1712 the French, allready present, officially took possession of the island and named it 'Ile de France'. When the British conquered the island in 1810 they named it Mauritius again. The island became independent in 1968 as a member of the Common Wealth. Despite the fact that is has been a British colony for almost 160 years, nowadays French still is the common language being spoken at the island.

Although we cannot find any references in the bibliographies available to us, the book is in the 1902 “Catalogue of books on Africa” published by antiquarian book dealer Francis Edwards (Part II, Madagascar, no. 131). Here as year of publication we can find 1860, however, the preface of this copy is dated 1862, as is the map, while no reference is made to any earlier publication. Also the copy in the British Library is dated 1862 and marked as a first edition, so most probably the date in the Francis Edwards catalogue is incorrect. 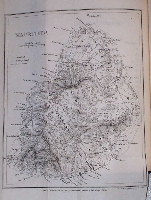