Travels, researches and missionary labours, during an eighteen years' residence in Eastern Africa.


Subtitled: Together with Journeys to Jagga, Usambara, Ukambani, Shoa, Abessinia, and Khartum; and a coasting voyage from Mombaz to Cape Delgado.

Half calf, 8vo, [2], half title, li, 1, [1], 566, [2]. Frontispiece portrait of the author, one folding map (of two), coloured in outline and 12 beautiful tinted lithographs printed by Vincent Brooks Lith., King St., Covent Garden. One of the lithographs is after a plate which has been drawn on the spot by Richard Burton. Contemporary half calf over marbled boards, the spine elaborately gilt-tooled, divided by gilt-stamped raised bands into six compartments with a black gilt title label in the second compartment. All edges marbled.

Some foxing, mainly on preliminary leaves and some very sporadic light foxing to the tinted plates. Lacking sketch map at the rear, which has been torn out. Slight rubbing to extremities, some edge-wear and bumped corners, bookplate of a private collector on front pastedown, as well as the bookseller's label of S.W. Theakston, Scarborough. Despite the flawsas mentioned, it still is a very attractive copy of this important book on East Africa.

The author starts the description of this journey from Egypt in the North, thence goes to Abyssinia (Ethiopia), where he visited place like Adowa, Shoa, Ankober and Massowa, then describes his journey all the way down to South Africa, visiting on his way also places like Aden and Zanzibar.

He extensively describes the countries and places visited, as well as the people.

Moreover, he was the first European to see Mount Kenya and to describe its snowcapped peaks, for which he was ridiculed by other european explorers who thought it unlikely to find mountains in this area of the world with their peaks covered with snow. But Krapf was right as we all know now..

Dr. Krapf, baptized Johann Ludwig, was born in 1810 near Tūbingen and died in 1881 near Stuttgart. He studied theology and went to Africa as a missionary in 1837. Although perhaps not too successful as a missionary, he accomplished a lot as an explorer both from the geographical as well as from the anthropological point of view. During the first few years in Africa he had collected rare Ethiopian manuscripts and made them available to scientists. Because of this work the University of Tübingen promoted him to Doctor of Philosophy in 1842. He discovered the Kilimanjaro and became an expert on Eastern African languages. On the latter subject he wrote several books, all published in Germany.

This book was published originally in 1858 under the title: Reisen in Ostafrika ausgeführt in den Jahren 1837-1855. Only when this work was translated into English and published under the name of J. Lewis Krapf, he became known to a larger public.

Prince Ibrahim-Hilmy I, p.349 (who mentions 1866 as the date of publication, which is probably a mistake by the printer). 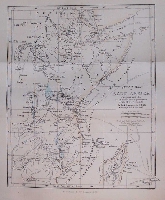