Southern Tibet: Discoveries in Former Times Compared with my Own Researches in 1906-1908

9 Text volumes in 4to. plus a panorama atlas in folio and 2 map atlases in folio, together 12 volumes in 11 volumes, uniformly bound in contemporary cloth with red and black gilt titled morocco labels with the original wrappers, meticulously preserved, bound in. Overall in a fine condition, the two map atlases in a special designed box in the same cloth and with the same labels as the other folio and quarto volumes.
Added is the prospectus for this atlas still in its original wrappers (with the same layout as the other 4to volumes), consisting of 32 pages of text, 4 sheets of photographs, 2 double page chromolithographed panorama's and 2 folding maps. The prospectus being complete with the, almost ever missing, original subscription form loosely inserted.

Sven Anders Hedin, by far the most famous Swedish explorer and the most succesful and best known explorer of the central Asian regions, was born in Stockholm the 19th February 1865 and died there the 26th November 1952. Already in his youth he had a keen interest in geography and while at home, after school hours, with enthousiasm drew maps of the countries he learnt about during geography lessons. As early as at the age of 13 he was attracted by the books of Livingstone and Stanley and these books made an unerasable impression.
The most impressive event of his youth was the return of Nordenskiöld on the Vega to Stockholm in 1880. It was then that he firmly decided to become an explorer of the Arctic regions and to come home one day to Stockholm to receive the same overwhelming welcome as Nordenskiöld. As a young boy he trained himself to cope with the circumstances he would encounter at the pole; in winter he washed himself with snow and of course slept with his window open. Moreover he drew maps of all polar expeditions carried out to date. He studied German to read the works of people like Ritter, von Humboldt and von Richthofen.

At the age of 16 he began to work on an atlas of the world which, once finished two years later, consisted of several hundred maps bound together in six volumes.

In 1884 the Geographical Society of Stockholm decided to honor Przewalski (or Prschewalski, Prjevalski, Prejevalski, Przhevalski), the famous Russian explorer of Asia, with their highest decoration, the gold Vega Medal. A member of the Society, who had been asked to give a presentation, requested Hedin to draw a map with the routes Przewalski had followed. Before the presentation Hedin was introduced to Nordenskiöld, who was deeply impressed by his map. Both because of this map and the first impression he got from Przewalski, Hedin got attracted to Asia rather than the polar regions.

In the spring of 1885 he was asked whether he had any interest to become a private teacher in Baku at the Caspian Sea for a period of half a year. Hedin accepted the proposal immediately:
”Mit einem Schlag kam ich auf eine neue Bahn. Die Polarliteratur blieb unberührt auf dem Bücherbrett stehen, und statt dessen verschaffte ich mir Werke über Asien. Wie wenig ahnte ich damals, dass der grösste Erdteil für ein ganzes Leben meine Braut werden sollte.” (Grosse Männer, denen ich begegnete. I, p.38)
He stayed there for a period of eight months and in his leisure time studied the Tartarian, Persian and Russian languages, after which he used his earnings to travel through Persia from North to South. Although not as an explorer, this was his first journey in Asia. Later he published a book about it.

After his return to Stockholm Hedin started studying geology and followed classes as well in subjects like geography, physics, meteorology, astronomy and philology. In 1888 he translated one of Przewalski's books into Swedish:
”After my first journey in Asia I dreamed about nothing else but to carry out a journey like Przewalski had undertaken..... to tell you the truth I dreamed about joining Przewalski once on one of his journeys.... Przewalski essentially influenced my life. Though it was Nordenskiöld who raised my desire to become an explorer, it was Przewalski who has been my guiding star in greater Asia.”

With the recommendations of Nordenskiöld and Brögger he went to Berlin to follow colleges by von Richthofen, who wanted him to deepen his geology study before going to Tibet, but Hedin's heart told him not to spend another few years in university but to start exploring systematically the little known or unknown parts of inner Asia.
In 1889 he was a member of a delegation sent by king Oskar II to Persia. After the mission in Persia was completed, with the financial aid of the king, he started his first journey to inner Asia; Buchara, Samarkand, Tashkent and Kashkar where he became a friend of the Russian consul for East Turkestan, mr. Petrovski, who had an important library related to Central Asia. By the end of December 1890 he started his return journey to Stockholm.
After this first journey he returned to Asia several times, starting with his first exploration journey from October 1893 till May 1897. A second exploration expedition lasted from June 1899 up till June 1902 followed by a third expedition which lasted from october 1905 till January 1909. Finally a fourth expedition was made from october 1926 till September 1935, but obviously under different circumstances this time.

During the period of 1916 - 1922 this work, Hedin's opus magnum, was published in 9 text volumes and 3 atlas volumes (though not sequentially). The main body of the work was written and published in English, while volume 5 is entirely in German, and some parts of the volumes 6, 8 and 9 are either written in German or in French. Only edition.

Vol. II: Stockholm 1917, pp. xi, 1, 330.
82 illustrations of which most full page b/w photographs, including a double page panorama, a folding panorama and a double page chromolithograph plus 24 maps, of which 5 either folding or double page.

The loose folio sheets of vols. XI and XII are placed in a box especially designed for this purpose and bound in the same cloth as the other volumes.

Overall a fine set with only a very few flaws as described here above, only very seldom found in this superb condition. Additional photographs always can be provided on request. This is an excellent set of books of a work of great importance. All the maps, both in the text volumes as well as in the atlas volumes, with the exception of the 3 maps in vol. XI as mentioned above, are flawless.

As already noted before Sven Hedin was the most important western explorer of Central Asia. He published many books about Tibet and other regions, but no work of his is as important as this one. Actually, although this work was published in the first quarter of the twentieth century, no other work up till this very day, surpasses it in completeness and detail. He interestingly deals with such topics as Tibet's history, including the early visits of westerners like Plano Carpini, its natural resources, zoology, culture and, above all, there are his detailed, accurate and beautiful maps and panoramas.
Only very few men are gifted both with the talents and the perseverance to make their dreams come true as Sven Hedin did. This book will remain an important landmark for many years to come.

For a detailed description of his life, achievements and publications please see Henze II, pp. 484-560. 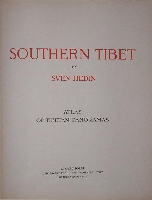 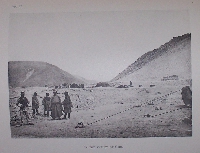 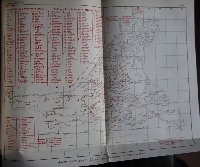 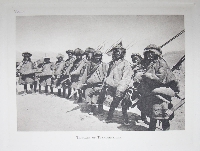 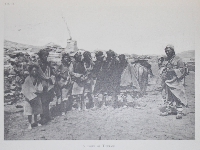 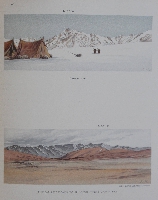 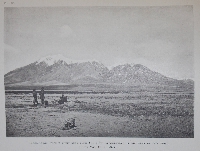 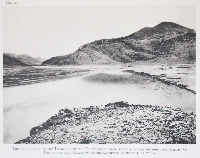