Voyage to, and Travels through the four principal Islands of the African Seas, Performed by Order of the French Government, During the Years 1801 and 1802; with a Narrative of the Passage of Captain Baudin to Port Louis in the Mauritius

Modern paper-covered boards with a paper spine-label, 8vo., pp. iv, 5-212 with 2 maps, of which 1 folding, and 5 aquatint plates (Prideaux mentions only 3 plates), of which 4 folding.

A very clean copy throughout with the inner margins of the plates trimmed when rebound. Nevertheles a very attractive copy.

Baron Jean Baptiste Geneviève Marcellin Bory de Saint-Vincent was born in 1778 in Agen, a city in the Département de Tarn et Garonne.
Descendant of a noble family, due to the french revolution, he received his academic education at home and had an interest in natural history. In 1797 he enlisted and was based on an island near the Atlantic coast.

When an expedition under the command of Nicolas Baudin was set up, sailing with two vessels around Africa and to Australia, due to the intervention of Comte Bernard Lacépède, the renowned naturalist, Bory de Saint-Vincent could join this expedition. On their way they visited the Canary Islands and Cape Verde Islands, rounded the Cape of Good Hope and continued to the Île de France (now Mauritius), where a problem arose between Baudin on one hand and several scientists on the other hand, resulting in the departure of a.o. Jean Bory de Saint-Vincent and André Michaux. After a while Bory de Saint-Vincent sailed to the Île de Bourbon (now Reunion) to collect plants and to map the island and to examine its vulcanoes.

After returning to France this book, under the original title “Voyage dans les quatre principales Iles des Mers d'Afrique” was printed in 1804. Within a year it was translated into English and German. The book principally deals with the islands of St. Helena, Tenerife, Mauritius and Reunion. 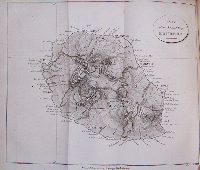