Large 8vo., (2), pp. 6, 1-227. A map with the author's two voyages indicated in red and blue lines and 18 exquisite duo-tone lithographs. Beautiful original publisher's cloth with blind stamped Indian style ornaments on front- and backboard as well as gilt decorations on both boards. The spine too is richly gilt. All edges gilt.
Vol. I only (of 2) of the second 8vo edition, containing the author's first voyage.

Some light browning in the text, as well as some sporadic and light soiling. The magnificent plates, for the greater part printed by Lemercier and for a smaller part by Plista, which are all but one protected with tissue guards, overall are clean and crisp.

The folio edition was published the year before by Auguste Bry without text and is virtually unobtainable. On the very few occasions that it comes to the market, it is priceless. The edition by Curmer forms the basis of all later editions by other Parisian publishers in respectively 1853, 1854 and 1858. 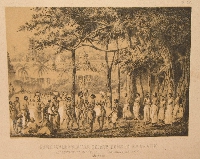 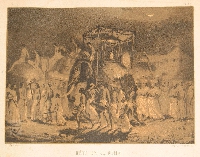 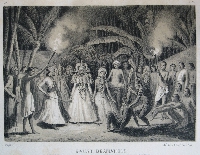