This pamphlet consists of 19 numbered pages, format slightly larger than A5 (215 x 135 mm), without wrappers as issued and sewn, some very light foxing throughout, a bit heavier on first and last page..
For protection it is placed in a heavy, modern dark green, full calf solander box with, in gilt, Speke's name on front board and short title on the spine. Head and tail of spine ruled in gilt, corners of front - and back board gilt stamped, while the block containing the leaflet is covered with papier vergé. A ribbon has been attached to the bottom, enabling easy and safe pick-up of the pamphlet.

This pamphlet is a slightly edited version of pages 155 -199 of Speke's “What lead to the discovery of the source of the Nile” (1864). When Speke started his second expedition to the Lakes, his third one overall into Africa, he travelled on the same ship as Sir George Grey, the colony’s Governor who, once arrived at the Cape, obtained some financial support for this expedition from the South African parliament.

In his biography of Speke, Alexander Maitland asserts that Speke had this pamphlet printed in Cape Town so that it could be sent back to his publisher Blackwood, in Scotland.

“ Speke meanwhile made arrangements with the firm of Saul
Solomon & Company for the printing of a nineteen-page
pamphlet called My Second Expedition to Eastern Intertropical
Africa, which he forwarded to Blackwood through one of his
sisters (probably Lady Dixington). This exceedingly rare
document, a bound copy of which is now in the possession of
Mr. Quentin Keynes, is considered a version of pages 155-99 of
What led . . . and was, at the time of printing, ‘about the 5th
part’ of the journal which Speke hoped to publish as a book ‘in
the winter or next spring season’, 1860-1; (*) ‘by that time [he
wrote] Burton’s writings will have a fair start of me – But a
book I must have to do justice to those who accompanied me on
that expedition’. “

However, according to others, upon Grey's suggestion, it may have been printed for circulation at the Cape, perhaps to members of the Cape Parliament, to encourage financial support for Speke's expedition.
Possibly both views can be reconciled by assuming that Speke had some extra copies printed with the explicit purpose to send at least one of those to Blackwood.

There are only 2 copies in North-American institutional libraries; the Smithsonian Institution and Stanford University. In both cases WorldCat erroneously mentions as date of publication 1857, the correct date to be 1860.
In 1856 John Hanning Speke, in the company of Richard F. Burton, sailed from India to Zanzibar and from there they went to the African mainland, only to return in 1859. He did not visit the Cape then, and had not yet seen the Lakes in that year (1857). Moreover the letter to Blackwood, as referred to by Maitland, confirms that there can be no doubt that the correct date is 1860.

There is neither a copy in the British Library nor in any of the British university libraries. The copy that once had belonged to the RGS, the Quentin Keynes copy mentioned here above, was auctioned by Christie’s in 2004. 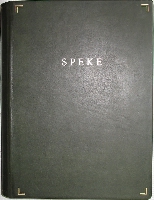