Jean Pierre de Smet was born in Dendermonde, Belgium in 1801 and died in St. Louis in 1873. He was educated at the college of Aalst and the Preparatory Seminary of Mechelen after which he emigrated to the United States in 1821, where he served his novitiate in Florissant, Mo., and was ordained in 1827. He began (1838) his long missionary career at a mission on the site of Council Bluffs, Iowa. In 1840 he went to Montana with two Salish who had come to St. Louis in search of a “black robe” (Jesuit), and he established missions in Montana and Idaho. Traveling widely across the Northwest from 1840 to 1846, he won the friendship of various tribes. Later he acted often as mediator between Native Americans and whites—notably in the council at Fort Laramie in 1851 and in the Yakima War of 1858-59. He undertook several peace missions to the Sioux. His books are excellent source material in Western history— Letters and Sketches (1843), Oregon Missions and Travels (1847), Western Missions and Missionaries (1859), and New Indian Sketches (1863). 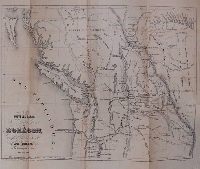