Caspar Specht's engravings of the castles in the province of Utrecht

Caspar Specht was born in Utrecht in 1654 and died there September 25, 1710. He was a son of Herman Specht, an engraver, etcher, printer and publisher in that town. Apart from these few facts, little is known about him. He has drawn and published a few maps, however, never an atlas. Moreover he published some views. His only publication that ever appeared as a book is this book: “De Ridder-matige Huysen, etc.”
It is very well possible that these plates were printed for subscribers only, as the plates for this work are dated from 1697 up till 1702, while we know that there exists an engraved title page bearing the year 1698, of which the only known copies are kept at Twente University Library (with 35 plates) and in Het Utrechts Archief (with 32 plates). Possibly this may explain why so very few copies survived; by the time the subscribers received the last plates and could have them bound, probably many engravings already had been framed or gone astray.

The copy here bears the date of 1703 on the title page. Further it is fully identical to the title page with the 1698 date. So probably, after having finished his partly dated series of castles and views, but now with an outdated title page, Specht decided to reuse his title page engraving, only now with a more appropriate date. On studying the current title page closely, it is still visible where the upper parts of the “6” and the "8", as well as the tail of the “9” in the original plate have been erased.
Following this theory one might expect that more copies with the 1703 title page would have survived, but to the best of our knowledge only two copies appeared on auction since about 1950; one copy in 1965 and our copy in 2007, while WorldCat reveals another copy in the Pierpont Morgan Library (¹). So it is possible as well that just a few subscribers requested Specht to adapt this title page before having the book bound.

Given the dates on the engravings the history of this book, however, remains vague. The Dutch bibliographer S. Muller Fz. in ‘Catalogus van den topographischen atlas der provincie Utrecht’ under entry nr. 1120 mentions the title, however, with a very peculiar deviation. He quotes the title as containing the word “gestighten” (edifices) instead of “gesighten” (views). In his description he mentions that there are 8 copper-engravings, but then in his comments he states that this edition should contain 30 engravings (²), all of castles. Given the title he noted, he had no choice as it left no option for the views on the towns as well. Then he continues stating that a new edition was published by Specht in 1703, this time with the correct title, which should contain 39 engravings.

The other Dutch bibliographer mentioning Specht, J.T. Bodel Nijenhuis in his ‘Topografische lijst der plaatsbeschrijvingen van het Koninkrijk der Nederlanden.’ only mentions a French edition under entry nr. 2473: ”Les villes, maisons des nobles, chateaux etc. dans la prov.d’Utrecht; tekst m. platen, door C. Specht en J. Vianen, (Utr.) 1697-1702. langw. 4º.”
So the format probably was the same and, given the title, it probably also contained the views, but further we know no details about this publication. WorldCat reveals no copies and we also were unable to find any auction records. Taking into consideration the date(s) of publication, may-be it even wasn't a book, but just a collection of plates.

This book marked the beginning of a new era in book publishing which would last for almost two centuries; an era with books depicting the castles and countryhouses of the nobility and other influential people. Of course these important houses had been drawn and painted already before, however, never with the explicit intention to bring them together in one book.
In the Netherlands there are several eminent artists known for their drawings of castles and countryhouses in the province of Utrecht (e.g. De Haan, Pronk, Rademakers, Serrurier), of which two are important in connection with Specht too. The first one is Roelant Roghman who made the major part of his drawings in the middle of the 17th century. The other one is Jan de Beijer who drew his pictures about a century later, so with Caspar Specht right in between those two we get a chrystal clear view on the architectural history of these houses during this period.

After Specht’s death in 1710 at least a part of his copperplates was acquired by the Amsterdam printer Joachim Ottens who had three sons. All three became printers as well. The two youngest, Reinier who was born in 1698 and Josua, born in 1704, formed a partnership in 1725 after both their parents had died and continued the printing house under the name of “R.& J. Ottens”. They republished several of the maps engraved by Specht. Around 1730 they republished this book as well under the title “Het Verheerlykt Utrecht, Vertoont in de Afbeeldingen der Adelyke en Riddermatige Hofsteden, Gelegen In de Heerlykheid van Utrecht.” together with a map which Specht already had engraved back in 1696 (S. Muller 1121; who dated this publication "c. 1700"), however, with two plates per page. But in this edition any reference to Specht has been erased (please compare pictures #5 and #6 here below). Moreover it contains only the pictures of castles, leaving out the views, like the view on Rhenen or the view on Amersfoort.
At an (unknown) earlier date, but most likely after 1715 (3), Joachim Ottens already reprinted these plates, one engraving per sheet, which were published either as a collection of plates or as a book without a title page, the latter of which a copy in a contemporary binding, is kept at Het Utrechts Archief.

For more pictures plus the description of this book please use the link at the top of this page.

(¹) Mr. J. Bidwell, Astor Curator of Printed Books and Bindings of The Morgan Library & Museum kindly informed us that their copy has 43 plates, including those of the castles of Groenewoude and Oudegeyn, while there is no plate of the castle of Amerongen.

(²) The engraving titled " ’T Huys te Batestyn of ‘t Hof te Vianen ", present both in the Twente UL - and in our copy, is not included in his (alphabetical) list of 30 castles.

(3) In September 2012: Mr. JanHein Heimel of the “Zeister Historisch Genootschap” informed us that their society has a copy of this book as well, with a slightly different title page. The cartouche is the same, the title is the same, however, the name of the publisher is different. The text reads:

So the words “door C. Specht” has been changed into “by I. Kanneman" and the year has been changed into 1715. Jan Kanneman apparently sold one or more copies in or around 1715. As he continued his business in that town up till at least 1732, it seems not very likely that he acquired the copperplates of Caspar Specht and then sold them to Joachim Ottens soon afterwards. So most likely he purchased some already printed sets from Specht’s widow, which also explains why most of the plates bear the imprint of Caspar Specht. There are no plates with the Kanneman imprint.
On the plate of " 'T Huys tot Seyst" there appears a heavy iron fence right across the bridge plus some rather peculiar ornaments in the foreground (picture #2) which apparently have been added by Specht at a later stage, as they do not appear on the first issue of this plate.

This copy has one very peculiar plate entitled “ ’T Huys te Haar van Agteren ” (picture #3). Actually it is without a title and without the name of the engraver, however, the copy from the Bodel Nijenhuis collection in the possession of Leiden University (Universiteitsbibliotheek Leiden, P327N017; please see picture #4 here below) bears this title.

We doubt that this plate was published by Caspar Specht for a number of reasons.

First the plate neither bears his name nor the name of the engraver, which is quite unusual with his engravings. Secondly the style differs greatly from his other drawings of other important houses; normally the pictures revolve around the house, while this picture is centered around two men on horseback with the house only depicted in the background.

The most important point, however, is the fact that the picture is not showing the backside of the house but the mirrored front side. It is extremely unlikely that Specht, who also made a drawing of the front side and who drew pictures of many such houses, would have made a mistake like this. It also probably explains why an unknown later printer, when he added the title afterwards, mentioned it concerned the backside as it quite obviously did not show the known front side of the house. Still later the version with the title was reprinted by Joshua Ottens as well. 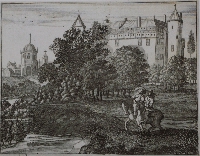