Portrait of Lesson as frontispiece in vol. I plus 41 plates h.t., of which 3 folding and 19 plates coloured by hand.
Contemporary red calf over marbled boards, the gilt lined spine divided in five compartments by four raised bands, with the titles in the second and fourth compartment. Vignettes on title pages. Small woodcuts in the text.

René Primevère Lesson received his primary education in Rochefort, then entered there the École de Médecine Navale (Naval Medical School) when he was almost sixteen.
First he served as a pharmacist in the French navy, then became in charge of the natural history museum in Rochefort.
After this he joined Duperrey's round-the-world voyage, which lasted from 1822 till 1825, both as pharmacist as well as botanist. On this voyage he as well was responsible for collecting natural history specimens and became the first naturalist to observe and describe living birds of paradise.
After his return to France he worked seven years on the preparation of the material regarding vertebrates collected during this expedition and published the results in this book. During the period from 1826 – 1839 he published several other books on zoology and ornithology as well.

'The "Coquille", under the command of Captain Duperrey, visited Sydney
in 1824, remaining there from 17th January to 20th March. King
Bungaree, a very quaint figure, who spoke a little English, waited upon
the Frenchman, with his retainers. The aborigines are fully described,
and the excursions and observations of the visitors recorded. The official
history of the voyage was not published, and the only contributions to it
are in these volumes and in the "Observations personelles" of M. D'Urville,
then an officer of the vessel, published in Vol. III, p. 673, of the Voyage
of the Astrolobe q.v. M. Lesson was naturalist of the "Coquille". Vocabu-
laries of some of the places visited, including New South Wales and New
Zealand, are given.'

The official account of the 1822-25 voyage under Duperrey was never published and so this account by the surgeon and naturalist on the ‘Coquille’ is the only separate narrative account. Lesson reported many important scientific details which Duperrey failed to publish in his account, including several extensive vocabularies and grammatical analyses, particularly of the Maori Language. The illustrations in this work include plates of views, native objects and tools, as well as coastal profiles and beautiful, hand coloured plates of a.o. the kangaroo, kiwi, opossum, platypus, wombat, and several birds of paradise. 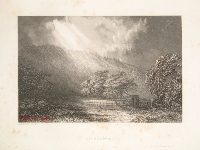