Travels through the Crimea, Turkey, and Egypt; Performed during the Years 1825-1828: Including Particulars of the last Illness and Death of the Emperor Alexander, and of the Russian Conspiracy in 1825.

Boards rubbed, upper board-edge of Vol. II bumped and very light foxing to some of the plates. A small stain on the fore-edge of the last pages of Vol. II, not bleeding into the margins of those pages.

These volumes together contain 7 aquatint plates h.t. by Newnham and 9 vignettes and hence are complete as per the list of illustrations.

Volume I is mainly dealing with Europe and Turkey, while volume II almost entirely is devoted to Egypt, with a smaller part dealing with Arabia. 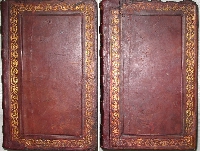