Notes on the Story of Sinuhe

Slight discoloration of the cloth. A clean copy throughout. This copy comes from the library of the Egyptologist Ricardo Augusto Caminos. His stamp is on the bottom of the dedication page and he has written his name on the top of the title page, which reads:

So he probably acquired the book then and there. He first studied at the University of Buenos Aires, thereafter respectively in Oxford and Chicago. In 1972 he became the chairman of the Egyptology department of Brown University and he retired in 1980.

The author, Sir Alan H. Gardiner, was one of the leading Egyptologists of his time. At first he followed some lectures by the famous Egyptologist Gaston Maspero, then went to Queen’s College in Oxford. Shortly after he graduated from Oxford he went to Berlin where he co-worked on an Egyptian dictionary. He published several books on the subject, was knighted in 1948 and died at the end of 1963.
For the greater part of the 20th century this was the most up-to-date edition of the Story of Sinuhe.

The Story of Sinuhe dates back till the twelfth dynasty (1938–1759 BC), and has survived in many copies throughout the centuries up till the Late Period (664–332 BC).

The Story of Sinuhe narrates the adventures of a nobleman who served Queen Neferu, daughter of Amenemhet I (1938–1909 B.C.E. ) and wife of Senwosret I (1919–1875 B.C.E. ). When the story opens, Sinuhe is on a military campaign in Libya with Senwosret I, son of the reigning king Amenemhet I. The news of Amenemhet I’s assassination reaches the army and Sinuhe panics, fearing that Egypt will fall into turmoil. He is particularly worried that his close connections to the royal family will jeopardize his own life should Senwosret I be denied his legitimate claim to the throne. He decides to flee Egypt, traveling across Egypt’s eastern border into the lands beyond. In his haste to leave, however, he does not pack sufficient provisions and nearly dies of thirst in the desert. A bedouin chief rescues him, and Sinuhe is able to reach the town of Byblos in modern Lebanon, eventually settling in Upper Retenu in modern Syria. There he meets a local ruler named Amunenshi, who gives him his daughter in marriage and land in a place called Yaa. Sinuhe prospers in Yaa, has children, and successfully leads Amunenshi’s army against other tribes. Near the end of his life, however, he decides he wants to return to Egypt for burial. He sends a letter to the king, and the benevolent Senwosret I welcomes him back to Egypt with full honors despite his cowardly flight years before. Senwosret I arranges for Sinuhe’s burial in Egypt, and the final verses describe Sinuhe’s tomb and his final contented days in Egypt waiting for death. (Source: encyclopedia.jrank.org)

A clean copy of a rare and important book with an equally interesting provenance. 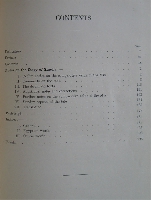