Souania (or Svaneti) is situated in the South-West of the Caucasus in nowadays Georgia. The area is quite unexplored as of yet and that definitely was the case when M. Bernoville explored the area in the early seventies of the nineteenth century during a two years' period. After his return in 1873 he prepared this book, which was published for the first (and the last) time in 1875.

Contemporary red half morocco over marbleized paper covered boards. The spine divided in six compartments by five raised bands with the gilt titles in the second and third compartment. Marbled endpapers with the armorial bookplate of castle Ramholz on the inner front board. The text of the bookplate reads: "Aus der Freiherrlichen von Stumm'schen Bibliothek auf Schloss Ramholz". Final endpapers, with four leaves at the start (half-title, title, dedication and preface) and one leaf (contents) at the end. Illustrated with twenty-two woodcuts in the text, of which one full page with a blank reverse side, plus seven magnificent duo-tone lithographs h.t. as well as a chromolithographed folding map of the area.
The leather a bit rubbed and some light foxing to a few of the pages and some of the plates, where it is mainly restricted to the margins. 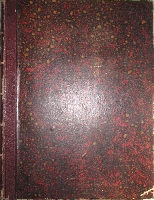 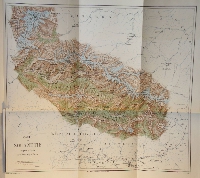