The picturesque beauties of the Hudson River and its vicinity: illustrated in a series of views, from original drawings, taken expressly for this work, and engraved on steel, By Distinguished Artists.

Later half blue calf over marbled boards. The spine gilt ruled with the titles in gilt as well. Beautiful marbled endpapers. Illustrated with one small woodcut in the text plus a steel engraved vignette and six steel engravings h.t.
All seven steel engravings printed on India paper and mounted on heavy card stock. Most copies were printed on ordinary paper. A large paper copy, 337 x 265 mm, resulting in extremely generous margins.

The binding slightly rubbed and some light foxing throughout on the plate(-mounts), however, heavier on one plate (please see picture nr. 4).
The text pages, printed on heavy off-white paper, are totally clean.

The first two parts of a series of very fine steel engravings, which was intended to run for a longer period, but was discontinued after only two parts had been published.

A beautiful, expensive publication with charming plates by or after E.W. Clay, Archibald Dick, James Smillie and others.

(*) Although 1857 showed the start of a financial crisis, the first worldwide crisis in history, Sabin probably means the panic of 1837 when the United States was hit by a heavy recession that lasted well into the 1840's, although of course it is quite likely that this is just an unfortunate typographical error in his "A dictionary of books relating to America". 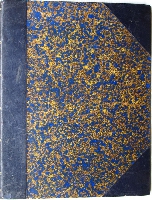 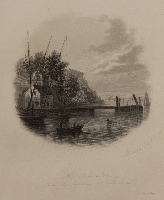 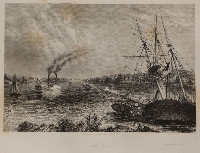 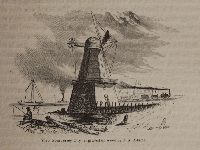