Here below are a few 19th century pictures of the Pool of Bethesda.

Wikipedia: "The Pool of Bethesda is a pool of water in the Muslim Quarter of Jerusalem, on the path of the Beth Zeta Valley. The Gospel of John describes such a pool in Jerusalem, near the Sheep Gate, which is surrounded by five covered colonnades. It is associated with healing. Until the 19th century, there was no evidence outside of John’s Gospel for the existence of this pool. Scholars argued that the gospel was written later, probably by someone without first-hand knowledge of the city of Jerusalem, and that the ‘pool’ had only a metaphorical meaning, rather than historical significance.

Then in the 19th century, archaeologists discovered the remains of a pool exactly matching the description in John’s Gospel, thus confirming the historical accuracy of John’s account."

The links below will lead you to the books from which these pictures have been taken. 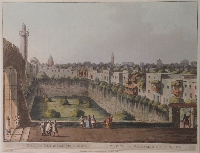 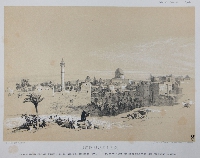 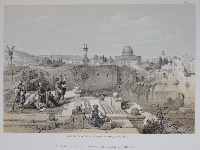