Prince Alexis Soltykoff (or: Aleksandr Mikhailovich Saltuikov / Aleksei Dmitrievich Saltykov) was born in 1806 in St. Petersburg as a member of an influential and wealthy family. He was a gifted painter and sketcher who, after a relatively short career in the Russian diplomatic service, settled down in Paris around 1840. From there he travelled to the East twice (February 1841 - January 1843 and September 1844 - February 1846) and crossed the Indian subcontinent.
After his return to Paris from the second voyage he had his letters as sent to one of his brothers, published under the title Lettres sur l’Inde (Paris: Amyot, 1848). Some of the drawings he had made on the spot during his voyages were lithographed and appeared in this book, published in octavo format, for the very first time.

In 1850 these drawings were lithographed by De Rudder and published by Auguste Bry in a large folio format under the title “Voyages dans l’Inde”, after which several subsequent editions were published in octavo format under that same title, first by Curmer & Lecou with a first issue in 1850 {1} and a second edition in 1851, followed by a subsequent (third) edition by Garnier Frères. {2} either in 1858 or later.

In 1853 the Parisian publisher H. Gache issued another book in folio format under the title "Habitants de l’Inde" with magnificent lithographs, this time depicting the people of India from the royals at one end to the deprived at the other end.

The last of the great books in folio format was (simultaneously) published by Smith, Elder & Co. in London and Smith, Taylor & Co. in Bombay in 1859: "Indian scenes and characters", consisting of 15 plates plus a title vignette, of which 5 plates were published before in 'Habitants de l'Inde' {3}. Also these plates, after de Rudder and Trayer, were printed by Auguste Bry of Paris.

The pictures here below mainly have been taken from the 1848 Amyot edition, with the exception of pictures #9 and #11, which have been taken from Habitants de l'Inde (Please compare them with pictures #8 and #10 respectively) while picture #12 which comes from the Curmer & Lecou edition can be compared with respectively #13 from the Garnier Fréres edition and #14 taken from "Souvenirs de l'Inde" published by Lecou around 1853. Picture #6 compares a plate from this Amyot edition with the 1851 Curmer edition. Finally pictures #18 and #19 come from the first and the second Curmer & Lecou editions respectively.

Please follow the links above to see more photographs of these books.

{1} There are two versions of this publication; one with both volumes bound in one, sumptuously decorated with both boards richly gilt and the frontboard abuntdantly coloured as well. And another edition with the two volumes bound separately and even more luxuriously decorated with extra colours both on front- and backboard, while the backboard is extravagantly blindstamped as well. In both cases the frontboard is decorated with a picture of a maharaja, while the backboard is showing a lute player. The pictures #20 and #22 are taken from the single volume edition (©2021 Drouotonline.com/Montignac), while pictures #21 and #23 are taken from the two volumes edition.

{2} The third edition by Garnier Frères was probably printed around 1858, though other sources mention around 1853. The printing history of this book by Garnier seems to be a bit obscure; probably two or more editions were published with the same title page, stating it is the troisième edition. Picture #16 and picture #17 here below are taken from two copies of the third edition by Garnier, yet they are not the same, quite obviously, with different lithographers, which is the case for more plates in copies of this edition.

{3} Respectively the captions of these five plates read in 'Habitants de l'Inde' (with index nr.) and Indian scenes and characters:
1  : Frontispiece --> A Fakeer of Rajpootana
36: Fakirs --> Fakeers
37: Le Roi de Gwalior --> The King of Gwalior and some of his Courtiers
38: Maha-Radja-Hindou-Rao-Bahadour  --> The Maha-Rajah-Hindoo-Rao-Bahadoor
42: Negre et Arabe  --> Arab and negro in the service of the Guickwar 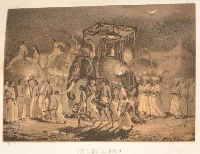 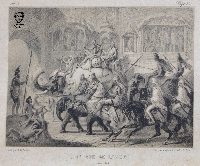 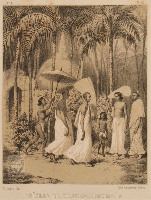 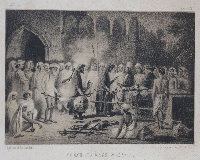 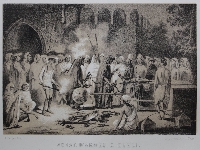 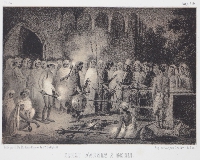