Occasional very light foxing in the margins of some plates only, the paper of five plates a little browned (see picture #13) and a stain in the upper margin of one plate, affecting a small part of the plate area as well (please see picture # 9). The paper on the front board partly bubbling (picture #1), the extremities worn, especially near the spine, but the binding still very sound with strong joints. Internally overall a very fresh copy of a rare book. Since 1975 only two copies appeared on auctions.

The gilt decorated flat spine divided in five compartments with the title in the second compartment. The book, with its strikingly beautiful plates, was published anonymously under this title. Actually it is the very first edition of “Voyages dans l’inde”, though with only 32 plates. Later editions have 36 plates; partly the same - and partly redrawn plates, as well as some other scenes.

The book contains a map with the author's routes of his two voyages (1841-1843 and 1845-1846) in red and blue plus 32 magnificent duo-tone lithographs after Prince Alexis Soltykoff. These exquisite, impressing lithographs appear here in print for the very first time, depicting people and scenes in such places as New Delhi, Madras, Ceylon, Calcutta, Lahore, the Himalayas and other places. Also there are some really impressive night scenes, where the environment is beautifully lit by torches.
The plates are lithographed by Cupper, De Rudder, Gerlier, Lehnert, Robineau and Walter. The five lithographs on the slightly browned paper are the five lithographs done by De Rudder. These were printed by Auguste Bry, so he probably used another sort of paper (see picture #13). All the other plates were printed by Lemercier. The map was litographed by delacôdre and printed by Rigo.

Around 1850 Auguste Bry published these extremely beautiful plates in a priceless folio edition under the title "Voyages dans l'Inde" with 36 plates, after which a "smaller edition" in a large octavo format was published in 1850 by Curmer under the same title, with 36 plates too. For the Curmer edition most likely a small part of the stones for some plates of this first edition by Amyot were re-used. Partly some of the plates were redrawn as well, while some others were entirely new. Hence this Amyot edition has some plates that never appeared in print again.

Prince Alexis Soltykoff was born in St. Petersburg in 1806 as the youngest son of a well known and esteemed family. He joined the Russian Foreign Service and was stationed in the Levant first, then moved on to Great Britain, Italy and Persia respectively. He retired in 1840 and settled in Paris where he died in 1859. From here he made the two voyages to India. As a gifted artist he made his famous drawings about Indian life and civilization during these voyages. After his return to Paris he decided to have his experiences, with regard to these voyages, published together with some of his drawings, which were lithographed for this purpose.

In 2009 in the "Journal of Kerala Studies", vol. xxxvi, Richard R. Walding, Helen Stone and Achuthsankar S. Nair published a paper with the following beginning:

"In 1841, the Russian Prince Alexis Soltykoff made the first of
two visits to India and published his observations upon his return to his
adopted home country of France. The books - in French - covering both
the 1841-1843 visit and the second 1844-1846 visit - were hugely
succesful, and a subsequent Russian translation in 1851 earned him the
title The Indian amongst his friends, colleagues and fellow aristocrats.
Of particular interest is his sojourn in southern India where he met the
king of the erstwhile state of Travancore - Raja Swathi Thirunal. This
Raja is renowned for his love of learning and enlightened ways, but
contemporary accounts of him are few and appear somewhat
obsequious. We have dragged Soltykoff's previously untranslated
musings off the shelf of the rare book room at the library and exposed
them to the translator's eye. What we have found is an absolute treat, a
feast, curried with Indian imagery and voices from 170 years ago.
Along the way, we present our critical and contextualised commentory
of his observations, but with the unfeigned delight of travelling with our
Russian prince. Ultimately, we reveal that, although Soltykoff arrived in
India with many preconceptions shaped primarily by his earlier
experiences in Russia and Persia and partly by his interactions, both
positive and negative, with his travelling companions, we cannot
overstate the importance of the freshness and uniqueness of his
observations, especially his reactions to the different peoples, their
cultures and the effect of their different religions on their daily lives. It
should become apparent that we enjoyed this virtual journey with our
keen-eyed companion - Prince Soltykoff - and want to share this
experience with others as he so brilliantly did."

To read the complete paper, please download the PDF file through the red link at the bottom of this text.

Please see Prince Soltykoff in India on this website to compare some plates of this edition with those in a few other editions.

A somewhat mediocre binding and one plate with a marginal stain. 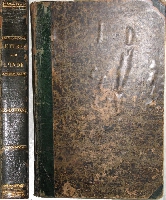