Rare set of re-lithographed plates which originally appeared in Hay’s "Illustrations of Cairo", 1840 in a slightly larger format. Owen B. Carter died in 1859 and this volume was apparently produced shortly thereafter in memoriam.

First separate edition, 19 lithographed plates mounted on thick card within beige borders, each with accompanying tissueguard leaf of letterpress. Some minor foxing, mainly to the mounts. The title page and text pages creased, inscription on first free endpaper and the very outer, lower corners of a few of the mounts a little damaged (see pics #13 and #16). Offsetting from the edges of the plates to the blank reverse side of the text pages (see pic#17). Original green cloth, gilt, rebacked and recornered in green calf. The cloth slightly rubbed. All edges gilt.

One of the rarest view books from the early days of Egyptian travel and archaeology. Carter travelled
with Charles Laver to join Robert Hay's expedition around 1830. Carter's training as an architect can be
seen in the wonderful architectural details in these plates.

Blackmer: "Carter was in Egypt c.1829-31, in Hay’s employ; he produced 19 of the 30 drawings used for Hay’s book.
Later he established himself as an architect at Winchester, where he had a large practice. In 1847 and
1849 he exhibited architectural drawings at the Royal Academy. Some of his Egyptian drawings are in
the British Museum Print Room.”

The book contains the following plates:

The numbers in square brackets are the numbers of the plates as they appeared in Robert Hay's Cairo (1840).

Blackmer 294. Neither in Ibrahim-Hilmy nor in Weber. 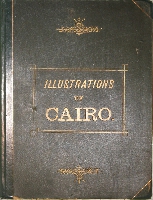 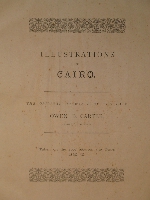 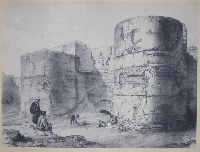 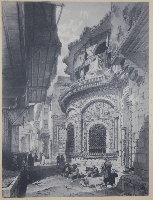 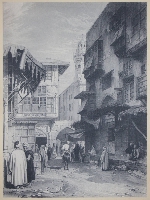 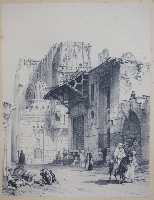