Castro was born February 26th, 1500 in Lissabon and died in Goa on June 6th, 1548. Henze writes about him that he is considered the most important navigator of his time and the first Western explorer of the Red Sea.

Modern speckled leather with the spine divided into four compartments by gilt rulers with the titles in gilt on a maroon dyed background in the second compartment, 8vo., pp. 2, (1), 1, 2, liv, ix, (1), 334, 1. Two large folding maps (*), one plate and another plate as frontispiece. The frontispiece plate (of Joao de Castro) is supplied in facsimile, but printed on identical paper as the second plate.

Some foxing throughout and a dampstain in the top fore corner of the half title page.

The original manuscript was composed in 1543, two years after the exploration of the Red Sea, during a long stay in Portugal, based on the notes made during the voyage.

For more details of the life of this important navigator please see Henze I, pp. 524 - 526.

(*) This work should contain only one map. The second map, titled "Costa e Cidade de Adem" (Aden in the Yemen), is taken from the atlas which originally accompanied this work and contained 16 maps in total. This atlas is often lacking.

A very rare book. No auction records either in ABPC or in RBH. 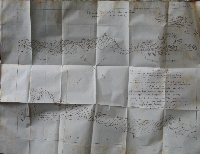