Contemporary full calf binding, 4to. (358 x 250 mm), pp. (18), 677, (1). Boards with borders of double gilt filets. The spine divided in seven compartments by six raised bands with the gilt titles in the second compartment and the other six compartments with gilt tooled lozenges within borders of double gilt fillets.
An engraving of the cardinal writing at a table and with putti above his head as frontispiece. This frontis is only found in this first edition (¹) while in later editions it was omitted. A title page with an engraved vignette depicting the coat of arms of the duc de Richelieu.

The work divided in four books preceded by an "Advertissement" of six pages, the contents of the four books on four pages and the approbation plus an errata list on the last three pages of the preliminary leaves.

Provenance: on the inner frontboard the bookplate of Claude Alexandre Edgard Testu comte de Balincourt (²) has been affixed.

The frontispiece cut a bit short at the fore edge. The binding quite worn along the joints and the corners of the boards, however, still solid with strong cords. The paper occasionally a bit browned in varying degrees, but never heavily, yet overall a nice, clean copy.

A pleasing copy of a book which is quite rare and seldom found in a first edition with only one sales record in ABPC and another three in RBH, the oldest dating from 1949.

Armand Jean du Plessis cardinal and duke de Richelieu (1585 – 1642) was an eminent statesman who served king Louis XIII. In 1616 he was made Secretary of State but already in 1617 he lost power due to court intrigues. After the death of Charles de Luynes he became a confident of the king again and at the latter's request in 1622 he was ordained cardinal by pope Gregory XV. From 1624 onwards he served as the king's principal minister though it lasted till 1629 untill he was officially appointed president of the royal council of ministers, a position he held till his death.
Cardinal Richelieu also established the Académie française in 1635.

(¹) There are only very few auction records of this first edition, the last one being the copy that was sold by Arenberg Auctions in 2018. That copy was lacking this frontispiece and the cataloguer noted:
... sans le portr. de l'auteur qui manque souvent ...

(²) The bookplate was lithographed by Durand. It is exceptional in the way that it combines the coat of arms of the counts of Balincourt with the names of the people that, by inheritance, contributed to the collection of Edgard Testu comte de Balincourt. The basis for the collection was laid by Pierre Guiraud (born in 1656) who bequeathed it to Jean Maurice Reinaud (1706 - 1792). The next owner was Jean Jacques Maurice Reinaud de Gênas who left his collection to Edgard Testu de Balincourt (1832 - 1914). The latter was the one who designed this bookplate with at the upper side the original bookplate of Pierre Guiraud with his motto "Da laborem dabo fructus" combined with parts of the bookplates of the other two previous owners and at the lower side the coat of arms of the counts of Balincourt. At the top it reads "1680 - 1880". The first year refers to the marriage of Marguerite Guiraud, sister of Pierre Guiraud, with Jean Maurice Fauquier while in 1880 this bookplate was designed by Edgard Testu. 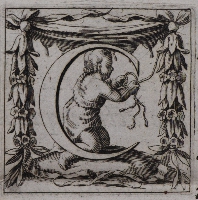