Architectural Decorations: A Periodical Work of Original Designs Invented from the Egyptian, the Greek, the Roman, the Etruscan, the Attic, the Gothic &c for Exterior and Interior Decoration

Folio, modern red calf with the gilt title on the front board, paper size: 510 x 376 mm. 3 preliminary and 3 trailing blanks.
The edges of the title page and the first suite chipped, but all leaves fully restored.

Only four (of five) suites of six plates each. Engraved title, 24 hand-coloured plates by G. D'Argenzio after Landi, published by the Proprietor G. Landi, and sold by Thos King Jun., some with aquatint and numbered 1-6, 1-6, 13-18 and 6 unnumbered, lacking the final Chinese section.

In this copy the paper is watermarked "J. Whatman" only, without a production year indication and the plate with the wrong caption 'Chinese Drawing Room' has been corrected in pencil to 'Roman Drawing Room'. The paper has evenly browned and is a bit soiled here and there. Published by the Proprietor G. Landi, and sold by Thos King Jun.

The four suites present are:

An extremely rare publication. Possibly issued in parts, with a view of a room in each style followed by plates of decorative details and furniture, and a ground plan and elevations in the case of the Roman section. The original drawing for the 'Grand Egyptian Hall' is in the Metropolitan Museum of Art in New York. The book is dedicated to the Marquess of Douglas & Clydesdale, Alexander Douglas Hamilton, who in 1810 married the daughter of William Beckford, known as "the richest commoner in England". Landi may have been hoping for Hamilton's patronage.

ABPC and RBH combined only list 4 copies to have appeared at auction between 1980 and 2017, of which two with 24 plates each and the other two with 30 plates each, of which one was an ex-library copy.

WorldCat lists one copy in the library of the University of Wales and 3 copies in America; viz. in the Avery Library of Columbia University, the Buffalo and Erie County Public Library and an incomplete copy (18 plates only) in the Getty Research Institute.

There also is a copy in the British Architectural Library, with their comments:

"Landi was an Italian architect who worked in England in the early years of the nineteenth century. He was probably born in Bologna, and Colvin notes that he may have been a relative of Giuseppe Antonio Landi (see No.1725). These 30 coloured plates and title-plate are all that was published of Landi's 'Periodical Work'. The plate numbering and imprint lines suggest that the first three parts were published monthly, between January and May 1810, and consisted of six plates each. The fourth and fifth parts were clearly to have contained plates [19-24] and [25-30], although there must be some doubt about exactly when, and in what form all of these plates were issued. The BAL copy lacks any imprint line and caption after plate [19] (although some captions have been added in pencil), and any numbering after plate 18, suggesting that these plates are proofs, before letters. The work seems to be uncommon in any form, and is not recorded by NUC, the BM. Gen. Cat., the Bodleian catalogue or the Nineteenth century short title catalogue. The scarcity of the work, and the incomplete appearance of the plates (some of which are, in the BAL copy at least, rather crudely coloured), suggests that they may never have been formally published. What survives, therefore, may very well be trial or experimental impressions of plates in various stages of completion, which Landi circulated privately, perhaps with the intention of producing a full-scale edition at a later date. However, Colvin (p.501) notes that in 1810 Landi was 'in financial difficulties and about to depart for Russia'."

As quoted here above the website of the Royal Institute of British Architects mentions that their copy has been rather crudely coloured. That definitely is not the case in our copy. Our copy lacks any imprint line and caption after plate 20.

A valuable and extremely rare publication. 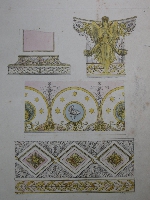 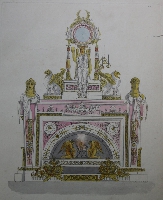 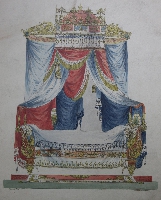 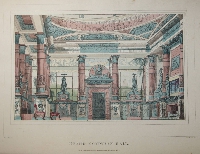 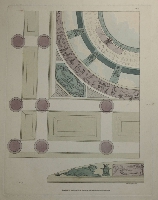 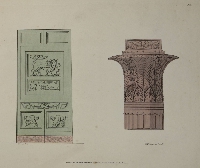 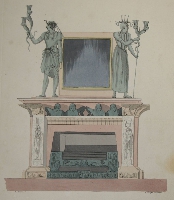 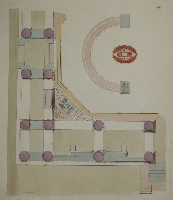 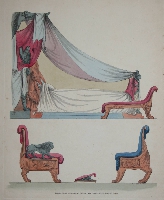 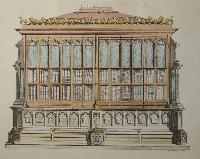 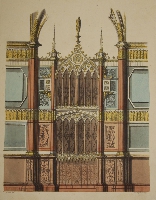 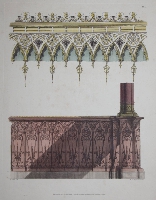 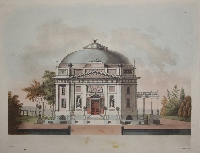 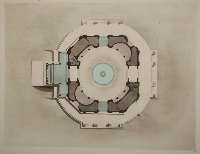 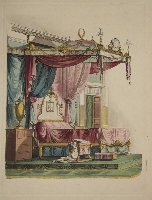