Travels in the Interior of South Africa, comprising Fifteen Years' Hunting and Trading; with Journeys across the Continent from Natal to Walvisch Bay, and Visits to Lake Ngami and the Victoria Falls.

Two volumes, 8vo., modern half calf over marbled paper boards, new endpapers, old preliminary and trailing blanks. The spines divided by five raised and gilt ruled bands into six compartments with maroon gilt title labels in the second compartment and the volume number in the fourth compartment of each volume.

In both volumes very occasionally some remarks or underlining by pencil. Both folding maps have been strengthened by backing them.

Mendelssohn: Starting from Natal, Mr. Chapman traversed the eastern portion of the Orange Free State by three distinct routes, and pursuing his travels through the western Transvaal and Bechuanaland, penetrated up to the almost unknown regions of Matabeleland. He also visited Walvisch Bay and Lake N'gami, and journeyed through the country of the Namaquas and Damaras. ... ... Few South African books give better descriptions of the sport of the country and the habits  and customs of the native races inhabiting the vast areas traversed, and throughout the volumes there are copious notes on the flora and fauna of the countries visited, amplified by the contents of a valuable index enriched with extracts from the works of able writers.

An important book on the interior of South Africa with an ample description of the areas visited and illustrated with interesting plates. 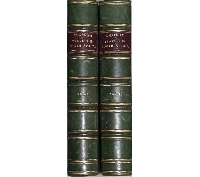 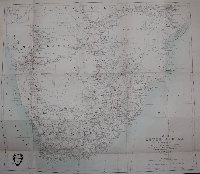