Modern cloth over the original paper covered boards, the upper board covered with the lithographed title page with a vignette depicting a group of people in a garden, folio, 523 x 353 mm; 42 duo-tone lithographs, each accompanied by one leaf of descriptive letterpress and preceded by the list of plates. Some very minor foxing throughout.

The covers carefully restored and rebacked with a new spine, ruled in blind, matching the one of the copy in the British Library, but with a different colour resembling the colour of the original cloth {2}. The text in gilt, placed in the second compartment of the spine, reads:

A fine work with expertly lithographed portraits. It was Soltykoff's wealth that enabled him to have these lithographs executed exceptionally fine. They were produced after the drawings he made during his two travels in India from 1841–43 and from 1844–46.

Amongst the people depicted are the women of Bombay, servants, fakirs (Muslim ascetics), Paharis (indigenous people) of the Himalaya, dancers, masalchis (torch bearers), bhisti (water bearer), but also members of the nobility like the young King of Gwalior or the wife and daughter of the Rajah of Coorg.

One of the rarest books on India with only 8 copies in institutional libraries worldwide {3} and with only 4 copies appearing at auction since 1966, the last one being the copy auctioned by Bloomsbury Auctions in May 2007 {4}.

Here below photographs of 12 of the 42 exquisite plates with the index nr. as per the list of plates and their captions:

Because of the exquisitely drawn and lithographed portraits one of the most important and beautiful 19th century books on India.

{2} Justification for the way of the restoration:
The spine is a reproduction of the spine of the copy in the British Library. The BL copy has a red leather spine, this copy has a dark cloth spine. One reason is that the red colour of the spine of the BL copy would be an entire mismatch with the darkened boards of this copy. Another reason is that the few copies that appeared on auction since 1966 all have a cloth spine, not a leather spine. Hence the choice for the material of the spine: cloth.
The titles to the spine of course match the copy of the BL and read:

With, near the tail of the spine, the name of the city of publication: Paris 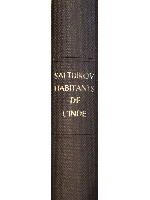