Original publisher's teal green cloth, decorated in silver and black with gilt lettering on spine and upper cover, 4to., pp. xviii, (1), 1, 119. All edges gilt. Illustrated with an etched frontispiece, 1 woodcut in the text, 7 charming wood engravings hors texte and 7 very fine etchings (photo engravings according to the list of plates) hors texte. The etchings protected by tissue guards. Wood engraved headpieces and initials at the start of each chapter.

Some very light bubbling of the cloth on the frontcover, emphasized by flashlight on the photograph of the cover here below, some extremely light soiling of the cloth and minor rubbing of the extremities. Very light agetoning of the text pages. Dedication inscription in pencil on first blank and with the very lower corners of three consecutive text leaves folded due to a miscut of the paper. A small binder's label in the lower inner corner of the rear pastedown.

Edgar Barclay was born in 1842 and died around 1913. He started his career as a painter of genre scenes and landscapes and as an etcher began with studies at Dresden, with Julius Schnorr von Carolsfeld until 1861 after which he continued his studies in Rome. There he established friendly relations with Giovanni Costa in 1874 and exhibited with him in that year at the Cincio Casino.
A member both of the Royal Society of Painter-Etchers and Engravers, and of the Royal Institute of Oil-Painters, Barclay exhibited extensively. His works were showcased mainly at the New Gallery and the Grosvenor Gallery.

In addition to this book Barclay’s works include: ‘Notes on the Scuola di San Rocco at Venice and its decorations by Tintoretto’ (London: Spottiswoode, 1876; 34p.), ‘Stonehenge and its earth-works’ (London: D. Nutt, 1895; xl, 152p.) and ’The ruined temple: Stonehenge, its history and a short account of questions associated with it’ (London: St Catherine Press, 1911; xxv, 75p.). So in addition to a career as a fine artist, Barclay travelled extensively and was an accomplished prehistorian.

Apparently the binding appeared in two variants: a more common one with red lettering on the frontboard and this variant with the title in gilt.

A rare and highly interesting book on Algeria with exquisite plates and with just one auction record in RBH and none in ABPC. 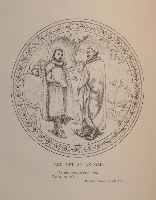