Exceedingly rare booklet, sewn as issued, bound in original wrappers, pp. 64, with a leading - and a trailing blank page. The whole preserved in a custom made solander box by Aquarius of London; gilt ruled red morocco over cloth, the spine divided into six compartments by five gilt raised bands, with gilt titles in the second compartment and the other compartments decorated in gilt.

The wrappers a bit soiled and with a small marginal tear at the upper front side, while the backside is quite wrinkled, as shown in the photographs. A handwritten name in old ink in the upper margin of both the wrappers and the title page. The errata leaf glued to the trailing blank and quite stained due to the glue used. The contents very clean.

The author, from French descent and born in 1811 in Montreal starts his narrative in 1834 when he travels first to Boston, from there to Quebec and back to Boston where someone advises him to embark for a whaling trip. He follows this advice and embarks on a vessel named the “Clay” with a crew of 26 of which he is the only Canadian. They sail to the Portuguese islands Flora, Fayol and Pico. From there they sail to the Cape Verde Islands, then further South where they catch a whale. He describes how they work for two days and two nights to process the whale.
He describes other fishes caught for food, utensils, birds, etc. Further he briefly describes his travels through Africa from the South through the North and concludes with his return to New York via St. Helena.

Although many institutional libraries have a copy of this book on microfiche, we could only trace seven original copies: the copy in the library of the University of Alberta, used to produce the microfiche and six other copies.

Despite the faults as mentioned a well preserved copy of an extremely rare book. 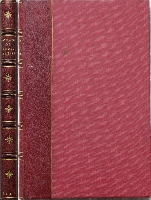 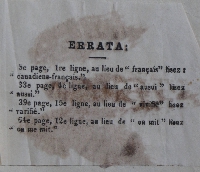