A rare and very important early work on the people of Mongolia and Tibet, originally published three years earlier under the title "Samlungen historischer Nachrichten ...". Though there are earlier 18th century works related to this area, they only partly deal with this country, while this is the earliest printed work dedicated solely and completely to Mongolia and its people. Already some accounts were written about the Mongols as early as the 13th century by Catholic delegates like Plano Carpini, who travelled there and back from 1245-1247, or Rubruquis (Guillaume Rubruck, Willem van Ruysbroeck) who was the first European to visit the Mongol capital of Karakorum on the Orhon River and wrote the detailed and extremely important "Itinerarium" about his three years' journey (1253-1255), but after that little or no information reached the West.

After the rule of Genghis Khan during the first quarter of the 13th century the empire gradually fell apart and in 1758 the country came under Chinese rule, whereby the part South of the Gobi (Inner-Mongolia) was under direct Chinese administration, while the part North of the Gobi (Outer-Mongolia) for the greater part maintained its political and cultural independence.

From the 16th century onwards Lamaism was spread under the Mongolian people from Tibet, resulting in the erection of a large number of monasteries and cultural changes. Pallas hence was the first westerner to visit Mongolia on an expedition sent to Siberia by Catherine II, empress of Russia, after these changes had taken place.

Peter Simon Pallas was born in Berlin on the 22nd of September 1741, where his father worked as a professor of surgery while his mother was a second generation Huguenot. Well educated as a young child he entered Medical College at the age of thirteen, then already mastering several languages and with a keen interest in zoology. After spending time at the universities of Halle and Göttingen he went to Leiden University, then one of the most renowned universities of Northern Europe where the most eminent scientist of their days (e.g. Linnaeus, Boerhaeve) and students from many countries came together. Here he was promoted Doctor of Medicin at the age of nineteen. Hereafter he travelled extensively through the Netherlands and Great Britain, then settled for a while in The Hague where he wrote his first book, entitled “Miscellania Zoologica”, describing his discoveries of several vertebrates new to science which he had found in Dutch museum collections. By his father's request he then returned to Berlin where, in 1767, he received the invitation of Catherine II (Catherine the Great) of Russia to become professor at the Academy of Sciences in St. Petersburg. Catherine II's opinion and ideas about the Enlightenment led her to encourage the attainment of new knowledge and to fund scientific investigations accordingly.
The expeditions from 1768 to 1774 were among the most important of the late eighteenth century. The first expedition was organized to observe the passing of Venus in front of the sun in 1769. It was very successful and purely scientific without any economic interests. The aim of subsequent journeys, however, were subject to economic interests and aimed at the discovery and exploitation of new Siberian resources. They all were carried out under the guidance of renowned scientists and the participants collected much information on mineralogy, botany, zoology, etc. Three of the expeditions in this period (1768-1769, 1770-1771, 1772-1774) were carried out under the guidance of Pallas, who then had his “Reise durch verschiedene Provinzen des Russischen Reichs” published by the Kaiserlichen Akademie der Wissenschaften in St. Petersburg during the years 1771-1776 in 3 volumes. It was during these three expeditions as well that he collected the material for this book, already very soon regarded as an early and important ethnological-anthropological work. When Pallas collected the information for this work, he put down curious and interesting information on the Tibetan geography, language and religion told to him by Tibetan lamas who lived at the Buryats. He was strongly assisted by Johann Jährig who learnt Tibetan and Mongolian to such an extent that he could translate a number of materials from these tongues. It was published in two parts of which the first part was published in St. Petersburg in 1776, while the second part only was published 25 years later in 1801.
The first part, here for sale, was reprinted in 1779 by Fleischer in Frankfurt and Leipzig, however, in a smaller octavo format.

As already noted here above, one of the results of these great expeditions was the present volume, especially desirable for its eight exquisite and fascinating black and white folding plates by D.R. Nitschmann (*) of which one measuring as large as 45 cm x 31 cm showing a Mongol encampment with all kind of activities taking place and in the foreground the stone momument to commemorate a cremated lama. The other plates showing a Kalmuk war tent, the construction of yurts, yurt interiors and exteriors, musical instruments, costumes, leisure activities, tool making, etc.
The folding frontispiece shows in the foreground a human skull and bone with a dog sitting next to it. This is allegorical; the Mongolians left the remainings of their dead to the wolves and the dogs.

The plates in this edition have been meticulously re-engraved after the drawings by Nitschmann; they match the engravings in the Petersburg edition in accuracy and size and only after a close inspection negligible differences can be noticed.

Contemporary half morocco over paper covered boards, 8vo., pp. viii, 350, a frontispiece, seven other folding plates and 5 folding tables. Title labels missing, spine with small chips and a few small worm holes. On the title page an ink-stamp of the Gymnasium Georgianum and a name at the foot. Contemporary or near contemporary note on ffep. Some very light worming to the upper inner gutter of first few leaves, one table with an old paper repair to verso and a few other leaves with small marginal old paper repairs.

Only very few of the world's leading university libraries own a copy of the 1776 Petersburg edition or this 1779 edition published in Frankfurt and Leipzig, while most university libraries have a copy of the 1980 University of Graz reprint.
This book is exceptional in every respect; it is a rare, important, scientific and valuable book, invaluable for the understanding of the Mongolian people, their culture and their history.

(*) David Renatus Nitschmann was employed by Pallas to join him during his third expedition (1772–1774) to make drawings, primarily of plants and animals. He was the first westerner to record aspects of the Kalmukian culture in pictures. 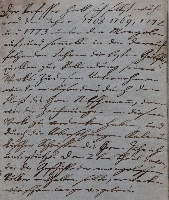 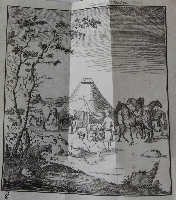 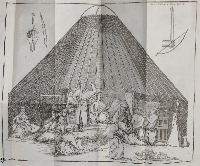 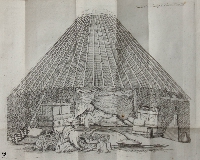 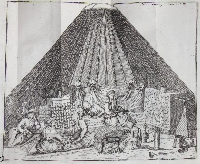 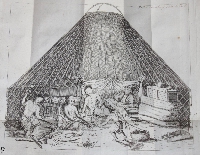