Contemporary or near contemporary red morocco, 4to., pp. vii, (1), 200, with 2 preliminary and 2 trailing blanks. Half title present. All edges gilt, illustrated with 60 engravings hors texte on heavy paper which all have been finely coloured by hand. The engraved title page with a vignette, coloured by hand as well and  another vignette as tailpiece at the last text page.
The fresh and crisp colours of the plates are vibrant and intense.

The covers with a central gilt lozenge, four small floral corner-pieces and gilt inner dentelles. Marbled endpapers. The spine divided in six compartments by five raised bands with double gilt filets at either side and with the titles in the second compartment. The other compartments decorated in gilt.

The text was printed by Thomas Davison, while the fine engravings were printed by B. McQueen.

Some offsetting from the tailpiece to first trailing blank, but overall an exceptionally clean copy of a book which is only very seldom found with coloured plates.

Although the book is not rare, ABPC and RBH together only show 4 unique records of copies with hand coloured plates since 1887.

"... J.P. Cockburn (1779-1847), a major-general in the Royal Artillery, who as a cadet had been a pupil of Paul Sandby. He became an artist of distinction, and during his periods of leave made many drawings of continental scenery, chiefly published in four series between 1820 and 1822."

"Cockburn, Maj.-Gen. James Pattison (1778-1847), an artillery officer who illustrated his own works of travel in aquatint and mezzotint."

An exceptionally beautiful copy with attractive hand-coloured plates and as such extremely rare. 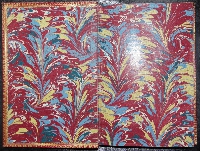