A Visit to the Seven Churches of Asia; with an Excursion into Pisidia; containing Remarks on the Geography and Antiquities of those Countries, a Map of the Authors Routes, and numerous Descriptions

Contemporary calf over marbled boards, 8vo., pp. iv, 339, 1, [lvs] 23, of which 3 folding. Bound with: Some notices on the Church of Landulph. By the rector. Devonport; Ramsey and Carrington, 1840. Pp. 2, 46, 2. The spine divided in five compartments by four raised bands, with the titles in gilt in the second and in the fourth compartment, the one in the second compartment on a maroon morocco label. Both the other compartments and the raised bands gilt tooled. Brown endpapers and 2 preliminary as well as 2 trailing blanks.

A map of Asia Minor with the authors routes as frontispiece, 3 woodcuts within the text followed by 54 lithographed inscriptions on 23 sheets which are individually numbered, however, the numbering is erratic, occasionally absent or sometimes amended in manuscript.

The tail of the spine professionally repaired, a gift inscription on the front free endpaper, some light offsetting from the map to the title page, the map a little foxed, very occasionally a short remark in pencil but overall quite clean, contrary to the second title: Some notices on the Church of Landulph, which is quite browned, though without affecting the legibility.

For the copy sold by Sotheby's in their London sale of 29th May 2002 their cataloguer wrote:

First edition, 8vo (215 x 124mm.), engraved folding map, 51 lithographed inscriptions on 19 leaves of which 13 are folding, some with lithographed or hand-written numbers, others unnumbered, contemporary half calf, map browned and offset onto title, binding slightly rubbed. In 1816, Arundell, a passionate antiquary, married Anna Maria, daughter of Isaac Morier, consul-general at Constantinople, and sister of James Morier, the author of Hajji Baba. The marriage sparked Arundell's interest in the East, and in 1822 he became chaplain to the British factory at Smyrna. In 1826, he travelled to the seven churches of Asia and to Pisidia, as related in this work. The number of plates and inscriptions in this work seems to vary.

Arundell was born in Launceston, Cornwall in July 1780, was educated at Exeter College, Oxford and died at Landulph, Cornwall in December 1846. Already at an early age Arundell was highly interested in antiquarian studies and he became a Fellow of the Society of Antiquaries of London in 1811.

An attractive copy of a rare book and of which the second title, by the same author, is extremely rare. 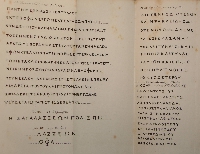