Antoine d’Orléans, duc de Montpensier (1824 - 1890) was the youngest son of king Louis-Philippe of France. In 1845, in the company of his friend Antoine de Latour, he visited a part of the Maghreb and the Levant. They travelled aboard the vessel "Gomer" of which André Louis de Sinety, an accomplished artist, was the Deputy Commander.

After their return Antoine de Latour published a book about  their voyage with a description of the places visited and the events which happened during their visits. The drawings by Sinety were carefully lithographed by Bayot, Dauzats, Guiaud, Mayer and Sabatier.

The plano atlas in contemporary shagreen over cloth boards, 562 x 392 mm. Extremities a bit rubbed, the cloth of the backboard stained and damaged at the lower outer corner.

The even more rare text volume, written by Antoine de Latour, was published by Arthus Bertrand in the same year as well. 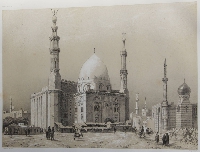