A Descriptive Account of Asam: with a Sketch of the Local Geography, and a Concise History of the Tea-Plant of Asam: to which is added, a Short Account of the Neighbouring Tribes, exhibiting their History, Manners, and Customs.

Though rebound in modern blue morocco a beautiful collectible set of an extremely rare publication.

The text volume deals with such matters as the climate of Assam, its natural geography, botany and zoology. There is an ample description of the teaplant, its history and its civil and social state. The various tribes in this region are described, such as the Butias, Akas, Duphlas, Miris, the Naga tribes, etc. etc.

The four large maps originally were bound within the text, but, due to their size, varying from approx. 46 x 60 cm up to 60 x 80 cm, have been placed in the matching solander box. They have been laid down on archival tissue and the folds have been strengthened with linen.

One map is a general map of Assam, the other three maps cover the Zilla of Kamroop, the Zilla of Durrung and Nowgong.

Both the text volume and the map volume are crisp and clean.

Overall a beautiful copy of an extremely rare book. 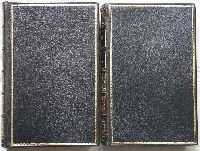 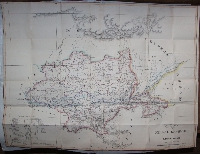