Vol. I illustrated with a geological map of the Cape of Good hope, coloured by hand and a large folding table.
Vol. II illustrated with a plate of musical notation, titled "Airs Chinois".
Both, the three frontispieces and the two plates protected by a tissue guard. All three volumes complete with preliminary and trailing blanks.

Vols. I and III with a light, absolutely unobtrusive tidemark in a part of the upper margins. Unfortunately pages 19/20 of volume I badly stained as well as some minor stains on the pages 21~28, though not affecting legibility. There also is a smal stain on the frontcover of this volume.
A stamp of a private collector (Sung Ling Fang) on the preliminary blank of each volume and a handwritten inscription on the preliminary blank of vol. I.
Marbled endpapers which are a bit soiled near the edges.

Despite the flaws as described above a collectible copy of a rare, highly interesting book with only 4 unique records in RBH and ABPC together. Contemporary three quarter Morocco, gilt filets near the spines over the leather and the corners gilt lined, the spines divided in five compartments by four raised and gilt bands. The titles in the second and fourth compartments with the other compartments tooled in gilt.

These copies are illustrated with three beautiful, different and clean frontispieces, being the first daguerreotypes ever taken in - and published here, in duotone, about China.

In 1843 Jules Itier joined Théodore de Lagrené to China who was sent there by the French king. He had adapted himself to the daguerreotype process, just invented a few years earlier, and thus made the earliest daguerreotypes known about China. Three of these daguerreotypes are reproduced here as the frontispieces of these three volumes.

Lust: Itier was an agronomist, with strong commercial interests, from Montpellier, attached to a mission to see Ch'i-ying about the Franco-Chinese Treaty. Much observation of Hong Kong, on close terms with the economist Pao Shi-ch'en.

A collectible copy of a valuable and rare book. 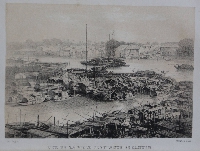