Richly gilt and decorated cloth, 8vo., pp. 4, 164, enpapers and blanks plus 22 lithographs h.t. A simple undecorated spine. The boards richly decorated in gilt and with coloured onlays, depicting a female Persian musician on the frontboard and a male musician on the backboard, all edges gilt.

The flat spine is without a title or any form of decoration. This binding is sometimes found containing the first edition of this book with the title on the spine, but occasionally it is found as well as the binding for 'Souvenirs de l'Inde". There are no auction records for a third edition in this binding and this copy has not been rebacked, so that we must assume that it was bound without a title on the spine.

All plates lithograhed by Trayer and printed by Plista and every plate protected by a tissue guard.

Some light foxing throughout.

Although first published only in 1851, This book deals with the time Prince Soltykoff spent in Persia in 1838 at the end of his diplomatic career. 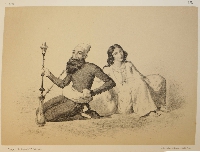