After having served in the navy for several years Charles Irby and his friend James Mangles in 1816 planned to make a tour through the European continent. The plans, however, were changed drastically and they travelled to Egypt. In the company of Giovanni Belzoni they sailed the Nile after which, in 1817 they travelled along the coast of the Mediterranean to the interior of Palestine and Syria in the company of the adventurer William John Bankes and James Silk Buckingham (the latter two then still having a friendly relation), as well as Thomas Legh, exploring new roads.

They visited Palmyra and Damascus and from there went to Baniyas visiting Phiala or Birkat el Ram first. They journeyed to several towns on the Eastbank of the Jordan River and travelled from Jerusalem via Hebron to al-Karak. Then they went to Petra, moved East around the South bank of the Dead Sea, up to Jarash and Tiberias and from there to Acre, from where, in 1818, they ambarked on a ship to Cyprus.
From Cyprus they sailed to Constantinople and travelled through Anatolia. In October that year they sailed back to Cyprus, from where they continued to Marseille and then home to England where they arrived at the end of 1820.

A contemporary morocco binding, rebacked with a modern morocco spine, which is divided in five compartments by four raised bands with a gilt black morocco letter piece in the second compartment.

A large folding map of Asia Minor, Syria, Palestine and Egypt bound before the title page and with the authors route outlined in colour. A folding ground plan of the Great Temple of Ebsambal. Another folding sketch of the ground plan of Petra, a sketch of the Backwater at the South end of the Dead Sea, six full page plates h.t. and a few woodcuts in the text. All plates flawless: no tears, no misfolds. 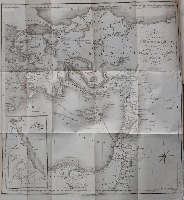 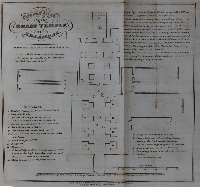 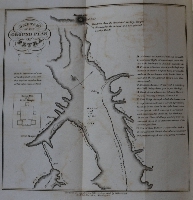