Fourteenth Annual Report of the Bureau of Ethnology. Bound in contemporary blind-stamped cloth, however, not the standard cloth used for B.A.E. publications. Binding of volume I shaken but still holding well. Corners bumped, head and tail of spines frayed, extremities worn. Contents slightly agetoned, but clean without foxing. 122 Plates, of which 18 double page plates, the rest full page plates, of which some in colour, and b/w photographs plus many illustrations in the text.

Part 1: The Menomini Indians by Walter James Hoffman.
This almost 300 page report contains a detailed description of the ceremonies and ritual magic of the shamans among the Menomini and other tribes.The author at length discusses their history, social organisation, cult societies, mythology and folk tales, mortuary customs, dances, their way of hunting and fishing, etc. etc.
Included is an appendix on the Menomini language, both Menomini-English and English-Menomini.

Part 2: The Coronado expedition, 1540-1542 by George Parker Winship.
In 1540 the Governor of Nueva Calicia in western Mexico, Coronado led 300 Spaniards and 1000 Indians into an expedition of the southwestern United States. Their journeys took them from the southern Nayarit to central Kansas, his lieutenants journeys stretched even further. Melchor Diaz crossed the Colorado River and entered California, Pedro de Tovar fought against the Hopi, while Garcia Lopez de Cardenas became the first European to see the Grand Canyon. Coronado, with all his men, systematically made the first exploration of the southwestern United States.

Vol. II: pp.1, (1), 641-1136
The Ghost-Dance religion and the Sioux outbreak of 1890 by James Mooney.
The Ghost Dance Religion was preached by an indian prophet with the name of Wovoka, a Paiute indian christened Jack Wilson. He preached the end of white supremacy; the white man would be destroyed and the land once more would belong to the indian tribes. Mooney extensively describes the situation in Pine Ridge reservation in 1890, the impact of the Ghost Dance religion on the starving Sioux people and their effort to escape to Canada, resulting in the massacre of Wounded Knee. In 1890 Mooney had been sent by the Bureau of American Ethnology to investigate the nature of the ghost-dance religion. He first made visits to the Apache, Arapaho, Caddo, Cheyenne, Comanche, Kiowa and Wichita and later on also to the Omaha, Paiute, Sioux and Winnebago, thus becoming the anthropological expert on this religion. The importance of this report is derived from Mooney's unbiassed views on the U.S. policy towards the indian people and his great interest in their religions.

James Mooney is generally regarded as one of the greatest American ethnologists, comparable with people like Boas or Powell.

Together these two volumes, due to the contributions of Hoffman and more importantly Mooney, give a good insight in American Indian religious life. 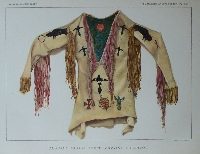