Oblong folio; 32 x 47 cm. Two suites of four aquatint engravings of Moravian mission posts in Antigua, one suite with the four aquatints in an uncoloured state, the other suite with the four aquatints in a fine, contemporary hand colouring. Both suites uncut. Put together in the original, pale green wrappers. Together with the, almost ever missing, description of the plates.
A small sticker with a number has been affixed in the margin on the front side of the wrappers with next to it a name in pencil. On the inside of the wrappers a number has been written in pencil too. A negligible spot of foxing on these wrappers.
The far outer edges of the uncut plates a bit dusty The uncoloured plates strong and absolutely totally clean, the coloured ones with occasionally some very minor soiling outside the plate area. Two of the coloured plates with an unobtrusive grease. One within the plate area, the other one outside the plate area.

For protection it is placed in a custom made clamshell box, sized 47 x 60 x 2 cm. The box is carried out in red and black velvet with in gilt Bodoni type the title "vues d'antigoa" on the cover. Moreover it has a separate compartment which contains the text pages. Both compartments furnished with a ribbon for safe pick up.

One plate engraved by F. Hegi, the other 3 plates engraved by J. Hürlimann, all after L. Stobwasser. The magnificent plates have the following titles:

1: "Vue de l'Etablissement des Missions à St. Johns dans l'Isle d'Antigoa aux Indes occidentales."
In this plate one can see the court surrounded by the buildings of the missionpost where the blacks are seated in the shadow. On the right side there is a, too small, wooden church with an annex     serving as the sacristy. The other buildings are used for the accomodation of the missionaries.

2: "Vue de Gracehill dans l'Isle d'Antigoa aux Indes occidentales."
This site is situated about eight miles from St. Johns and about one mile from the city of Falmouth. The view from the mountain over the neighbouring plantations where the negroes are living, is spectacular. On the left there is a small house which serves as a school for their children, while a bit lower on the right there is a waggon-shed.
Of the two main buildings, the church is on the right while the missionary house is on the left with in between the water-reservoirs.

3: "Vue de Gracebay dans l'Isle d'Antigoa aux Indes occidentales."
Gracebay, seen here from the west, is situated about four English miles from St. Johns and about five miles from Gracehill. The site is not owned by the mission, but has been rented from a neighbouring plantation. Of the three adjoining buildings the one on the left is the church, while the one in the middle is the livinghouse. The annexes are on the right.

4: "Vue de Cedarhall dans l'Isle d'Antigoa aux Indes occidentales."
Cedarhall, seen here from the Northwest, is at a distance of about four English miles South of St. Johns. Religious education for the blacks here was restricted to the Sundays; throughout the rest of the week they were too remote from St, Johns. Therefore in 1821 an acre of land was donated to the missionary to establish buildings there, as sitiuated in about the center of this plate. The plantation house of the former owner of this piece of land is visible in the background on the left.

This copy is complete with the almost ever missing description (in German) of the sites as shown in the plates. It has been printed on a small plano sheet which has been folded, but not cut, into quarto format, i.e. 8 pages.

This set is rare in its original wrappers, but extremely rare when complete with the descriptive letterpress. Only two records in ABPC, of which the most recent dates back to 1987 and one other record in RBH from 1983.

Neither in Abbey, nor in Prideaux or Sabin. 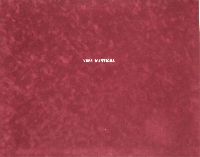 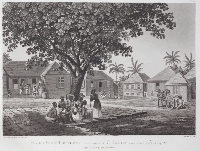 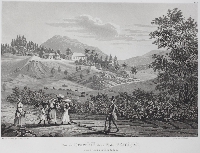